California’s Proposition 2 has stirred up plenty of controversy, both between the animal exploitation industries and the animal protection industry, and between animal advocates.

Proposition 2, a ballot initiative that will be voted on this November, is intended to eliminate certain confinement practices used by animal agribusiness, albeit with some exemptions. Basically it would require that, for the majority of each day, calves, egg-laying hens, and pregnant pigs be confined only in ways that would allow them to lie down, stand up, fully extend their limbs, and turn around freely. In other words, it doesn’t eliminate confinement systems; it merely modifies some of them to be slightly less restrictive (in the case of California, this mainly affects egg production). Exceptions are built in for seven-days prior to a pregnant pig’s expected date of delivery, and for 4-H programs, rodeos, fairs, research, veterinary purposes, slaughter, and transportation. Violations of the regulations would be misdemeanors, restricting the potential fine to $1,000 and/or imprisonment up to 180 days.

Recognizing the disagreement between different types of animal advocates over Proposition 2, Doris Lin, the host of About.com‘s new animal rights topic, is hosting a debate on Proposition 2. Professor Gary L. Francione, author and abolitionist animal rights proponent, represents the con argument, while the the pro argument is offered by animal welfare proponent Paul Shapiro, the Senior Director of the Humane Society of the United States‘ Factory Farming Campaign. Shapiro calls the ballot measure Making History for Animals, while Francione calls it A Losing Proposition. Of course, it’s a strange debate because there’s no real back and forth between the two debaters, not to mention the fact that HSUS’s mission is modifying animal use, not abolishing it.

While you’re off reading online debates, you might be interested in some other topics hosted by Opposing Views. The site asks a lot of controversial questions, not just animal-related issues, and it seems to be fairly well designed and easy to navigate. In addition to calling on “experts” (mostly special interest groups) to debate the subject, Opposing Views invites your comments, involving you directly in the debate. The issue of “pet” ownership finds Francione and HSUS in opposition once again. You can also read their arguments and the arguments of other “experts” on a variety of related topics, including using animals in research, keeping animals in zoos, and “meat”-eating. There’s no debate on Proposition 2 over there as of yet, but they do take suggestions for topics, and maybe Opposing Views would provide a better format for that debate than the statements offered at About.com, seeing as how it allows for counterpoint and objections.

Back to Proposition 2, of course the animal exploiting industries are totally opposed. They don’t want animal advocates making any inroads on regulating how they use animals. They see the measure potentially leading to other regulatory reforms around the country, so they have more or less united in their opposition to it.

Seems intuitive how an animal-friendly person might vote, right? Well, consider that this measure does not come close to questioning animal use; it merely modifies how animals are used in such a way as to make it seem somewhat less objectionable. Also consider the following:

1. Veal crates and gestation crates (for pigs) have already been phased out or are being phased out by the industries in California as this debate goes on. At this time, there is no indication that doing so is harming the industries or reducing consumption of flesh products from calves and pigs.

2. Proposition 2’s regulations apply only to producers in California. It is not a ban on products produced using these methods. Stores seeking less expensive eggs to sell their customers may buy them from out-of-state producers, and egg companies that don’t want to follow the new regulations can move their operations out of state.

3. Proposition 2 does not end the confinement and torture of animals from their artificially-induced births to their untimely killings. If successful, sustained, followed, and enforced, Prop 2 will only allow certain animals a bit more space to move and adjust their position while they are being confined, and for only part of the day. Even then, all bets are off during transport and slaughter. It does not address the myriad other harms caused to animals throughout the production process.

4. Egg production systems in Europe have gone cage-free, and the barn systems they are using there have even received a seal of approval from the Royal Society for the Protection of Animals, which leads consumers to believe that the animals’ welfare is being given top priority. The video below shows that there are plenty of problems inherent in cage-free systems.

I had brunch at a new Boston area restaurant today, Vej Naturals, and very much enjoyed my Southern Platter… 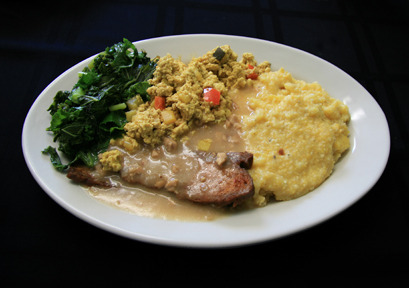 …and the bites of French Toast my friend (the photographer, Laureen) was kind enough to share with me: 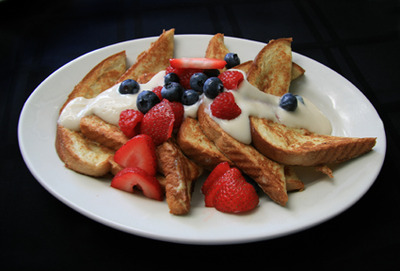 Just a brief reminder how, ahem, “deprived” vegans are.